The most common cause of bright red blood in stool is bleeding from the hemorrhoids. The bleeding is generally minimal, painless and self limiting.

However, I have recently come across few cases where the bleeding is quite profound needing multiple units of blood transfusion. 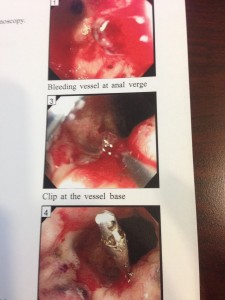 This is my first experience with use of clip to control bleeding from a hemorrhoidal vessel.